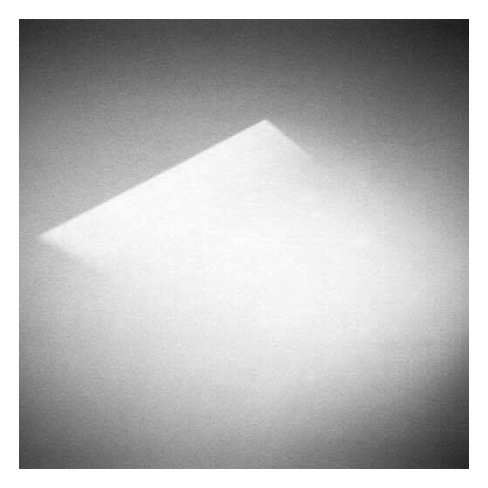 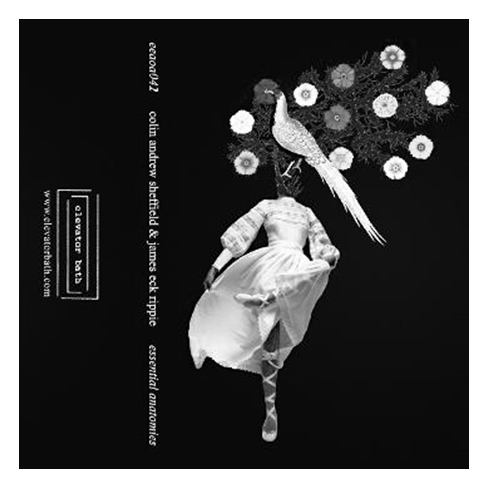 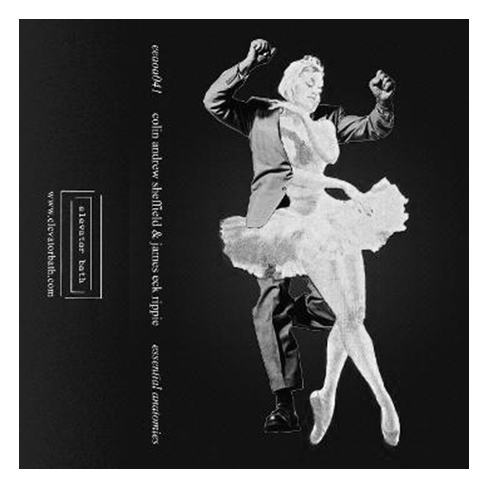 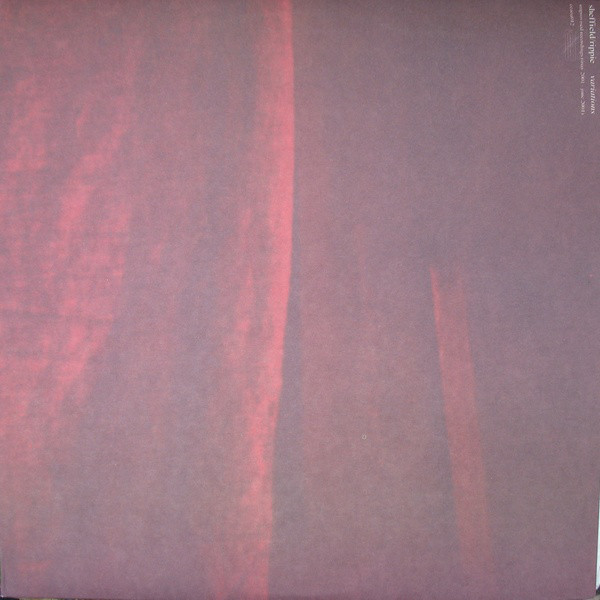 "The ambient world Colin and James have created seems reminiscent to the deepest ocean depths. Darkness and almost immobilizing pressure grip your senses. There is a new freedom though, you are listening to something yet to be discovered. Sounds undulate into focus and individually reveal themselves. Electric disbursement of unknown processes combined with an architecture taking millions of years to create. Most astonishingly, there seems to be very little patterns. This world of sound changes completely over the course of both tapes, yet never seems to change tone or texture. A droning backdrop is persistent while the most delicate dazzle of creativity dances across the canvass. Your thoughts will be pushed and pulled until eventually submitting the fact understanding is beyond comprehension. So i tried to tune this composition in with the equivalent of a flat head screw driver. The sides are pried open and the magical creations are slowly seeping out."- Lost In a Sea of Sound full review

"The first volume delves into samples and loops, conjuring comparison to Basinski and Kirby, two contemporaries who have also remained relevant, defying the odds.  This gorgeous recording drifts and curls, softly snorting like a dragon taking a break from a century’s nap.  Touches of modern classicism grace the recording, lending it an air of sublimated dignity.  Less instrument-based than mood-based, the two side-long tracks invite listeners to wander down painted hallways and to marvel at the fading colors.

Fast-forward only a bit, to winter 2017.  A second tape is released, bearing the same title but slightly different track names (the unsurprising “3” and “4”).  The cover image is again fascinating, repeating the dance theme, although these are by no means dance tapes.  Eugenia Loli’s vintage collages operate as visual reflections of the music, best described as abstract plunderphonics.  Sheffield and Rippie use samplers and turntables to sculpt the past into new forms that defy instant categorization; suffice it to say that the old has never sounded so new.

The latest edition of Essential Anatomies is thicker and crunchier than its predecessor, with sharper edges.  Where “1” and “2” soothe, “3” and “4” abrade.  The shifts are swifter, the notes more dissonant.  On Side A, one can even hear rhythms, albeit very slow.  The end of “3” bleeds a surprising amount of turmoil, which subsides slightly on “4”.  The “haunted ballroom” vibe of Variations resurfaces midway through Side B, providing a link back to that earlier work.

23-minute tracks need variety in order to hold the attention, and the duo is up to the challenge.  The mystery of the music draws one in: what’s coming next?  On subsequent plays, the ears gravitate to specific segments and sounds: stuttered stardust, feedback loops.  If Volume One is an invitation to surrender to large sounds, Volume Two is a celebration of small sounds.  Some samples last for only seconds, and never repeat; others wander through mazes before returning.  Through it all, the live improvised nature of the recording shines through.  The flow is not perfect, nor is it intended to be.  This is a soundtrack to curiosity.  What’s next?  We’ll just have to keep listening."  - Richard Allen A Closer Listen full review 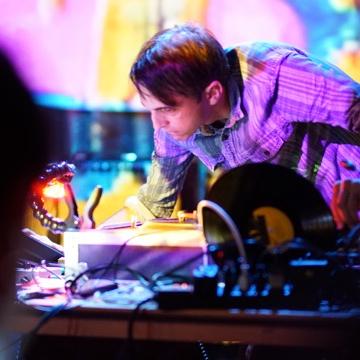 Elegantly packed with Casey Reas’s superb artwork arrives the sixth installment in the Crónica’s Product series. This split opens with a long haunting composition from Pawel Grabowski, it settles with some ghostlike pieces with even a medieval feeling from The Beautiful Schizophonic and reaches its closure with Natureza Morta, a stunning piece teaming up Paulo Raposo and James Eck Rippie.

improvised recordings (May 2001 - July 2001)  Variations is a selection of works from the duo of Colin Andrew Sheffield (samples, processing) and James Eck Rippie (turntables, guitar). The three pieces comprising this album were recorded "live" with no additional production and were wholly improvised. Each of the album's pieces utilizes sounds from a single acoustic instrument as its sole source material. Here, the duo's examinations of the harp, guitar, and flute result in three unique components of a unified whole: a textured ambience that is rich and subtle, simple and complex.  On black 180g vinyl with lovely full-color jackets, in an edition of 400 copies. 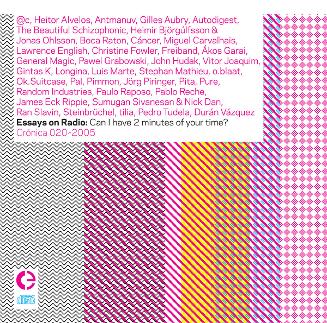 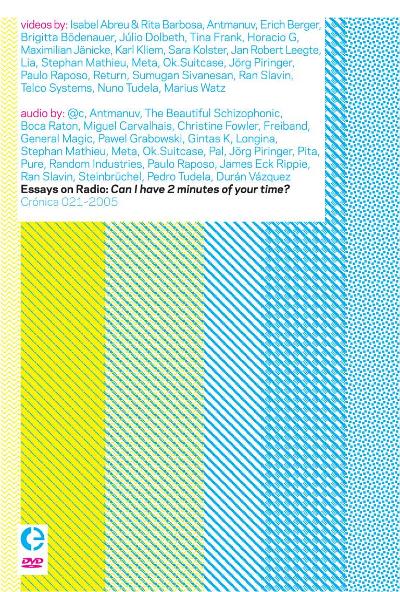 Crónica presents Crónica 020~2005 and Crónica 021~2005, our second compilation, and one in two volumes. This compilation comprises an audio CD + DVD release and, as merely compiling tracks is of no big interest to us (no matter how interesting the tracks may be), what we searched for was an unifying idea that could help to create a coherent collective composition, not only showcasing both the artists and the label, as well as providing the possibility for some meaningful work to be done. And though the concept of this particular release still revolves around the sound medium, we've decided to stress the media label tag a little further with a full DVD release. The dvd showcases video work specially produced for this compilation, from some of our artists and some special guests. Essays on Radio aims to comment on the sound medium, on the technology and the culture of radio. In the midst of media saturation, radio can easily end by being an overlooked medium, not only due to its lower visibility compared to most mainstream media but mostly because it is an un-visual medium. It is also one of the longer standing and of the oldest electronic media that is still alive, so the novelty factor is not a help. Radio was the first broadcast medium, as well as the first that was sound-specific and intangible. Historically, radio was the primary responsible for an awareness of sound that went beyond the strict scope of music. Radio is a saturated live medium, where much happens simultaneously. Having little or no control about the sources and the interferences during broadcast and reception turns radio into a medium where we can easily and objectively experience noise. Therefore, it was probably through radio that many first heard white noise. It was probably with a radio receiver that many first modulated noise as it was probably through radio that we experienced randomness along with the lack of control and indeterminacy. This theme was intended to provide the artists with a starting point to approach the work. Unlike we did in the previous compilation, there would be no audio sources provided to the artists beforehand. In this release, what we were looking for were not exercises on composing from shaping any given sound matter but rather on relating the musical pieces to this particular context: Radio. As a further way to coherently organize the CD, we asked all the artists to produce the pieces with a fixed duration. This symbolic length allowed us to fit work from some of the artists we released so far and a few selected guests and it also served as a strong structure binding all the compositions together. Given the fact that we are closing the 2nd year of Crónica releases, we proposed that all tracks should have the fixed duration of 2 minutes, exactly. Therefore the sub-title: Can I have two minutes of your time? 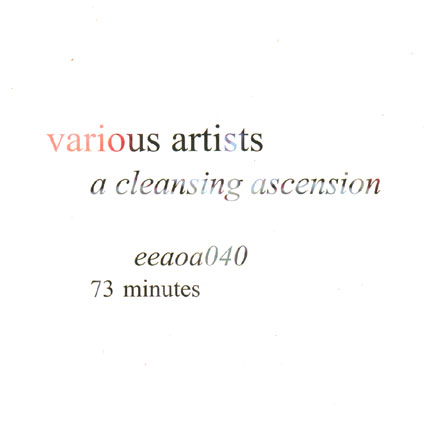 On the occasion of Elevator Bath's 10-year anniversary, the label has issued its first compilation release. This 73-minute compact disc is not a retrospective but is instead a collection of (almost) entirely exclusive material from 10 artists currently involved with Elevator Bath.  A Cleansing Ascension includes previously unreleased recordings from: Matt Shoemaker, Adam Pacione, Jim Haynes, Keith Berry, Rick Reed, Dale Lloyd, Colin Andrew Sheffield, James Eck Rippie, and Tom Recchion.   This is the ideal introduction to the label, offering a particularly cohesive yet varied selection of works from some of the brightest names in the experimental music community. Uneasy narrative, warm ambience, rusted drones, sine waves, field recordings, meditative composition, plus a glorious photograph on the inner sleeve (taken by Colin's father in 1971) can all be found in this single, beautiful package. Elevator Bath = A Cleansing Ascension.   As always, packaged inside two elegant, printed sleeves (this time in full color) with soy-based ink on 100% recycled paper, this compact disc has been issued in an edition of 650 copies. 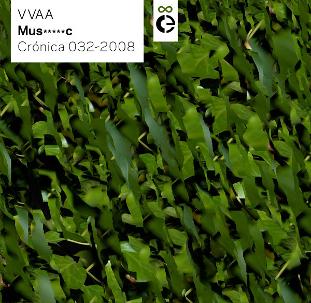 "...For those who might relish some abstract noise variations, Pure’s 643 and Marc Behren’s Website would be good back-to-back listening. Pure’s piece is filled with distorted, cacophonous noise and bent, discordant tones that rise and fall while Behren’s twittering work is glitch in the truest sense – fragmented, noisy, and machinelike. Still noisy but, in addition, warped and shadowy, James Eck Rippie’s Black Tranmission, Pedro Tudela’s Op1s2sm, and Durán Vasquez’s Segunda Natureza (Noite) traverse twisted, darker paths. If your cup of tea is dense, grating ambiance based on room acoustics, then Gilles Aubry’s s6t8r should be more than enough proof that empty rooms aren’t necessarily quiet…" full review

JAMES ECK RIPPIE "BLACK TRANSMISSION"  is a 2002 installation done using radio transmissions through a multi channel system of bare speakers on a floor. Some with sub vibrations to rattle the chards of metal inside of them. This is released on a Cronica free download. A very wonderful compilation titled VVAA Mus*****c. So for your listening pleasure.. 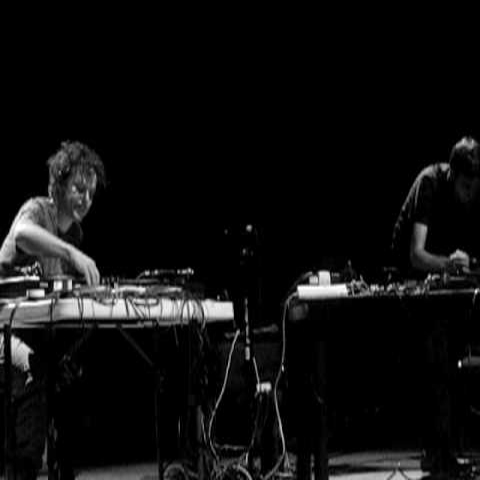